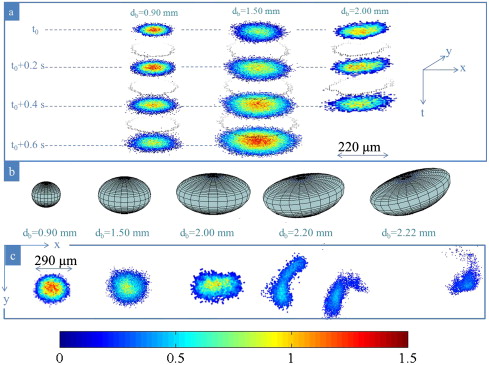 Based on planar laser induced fluorescence with inhibition (PLIFI) experiments, the mass transfer behavior in the wake of single rising air bubbles is investigated. Bubbles of equivalent diameters ranging from 0.90 to 2.24 mm are studied, exhibiting vertical and zigzagging paths when they rise in the liquid. The transferred mass in the wake of such bubbles, considered as spherical or oblate ellipsoids, is directly visualized and represented in three dimensions for some cases. A specific image processing and mathematical approach are proposed to accurately quantify the mass transfer rate by estimating the liquid side mass transfer coefficient and flux density. After a comparison of liquid side mass transfer coefficients with values of the literature, this approach is tested to evaluate first the influence of bubble diameters and that of the liquid composition on the mass transfer. Liquid media with small amount of salt, glucose and glycerol, inducing surface tension and/or viscosity changes, are considered. A significant decrease in the mass transfer efficiencies, down to 88% depending in the added component, is observed and analyzed for these different liquids.